I love everything about PICO-8. It's a fantasy gaming console that wants you - and the kids in your life and everyone you know - to make games!

How cool is that?

You know the game Celeste? It's available on every platform, has one every award and is generally considered a modern-day classic. Well the first version was made on PICO-8 in 4 days as a hackathon project and you can play it here online. Here's the link when they launched in 4 years ago on the forums. They pushed the limits, as they call out "We used pretty much all our resources for this. 8186/8192 code, the entire spritemap, the entire map, and 63/64 sounds." How far could one go? Wolf3D even?

"A fantasy console is like a regular console, but without the inconvenience of actual hardware. PICO-8 has everything else that makes a console a console: machine specifications and display format, development tools, design culture, distribution platform, community and playership. It is similar to a retro game emulator, but for a machine that never existed. PICO-8's specifications and ecosystem are instead designed from scratch to produce something that has it's own identity and feels real. Instead of physical cartridges, programs made for PICO-8 are distributed on .png images that look like cartridges, complete with labels and a fixed 32k data capacity."

What a great start and great proof that you can make an amazing game in a small space. If you loved GameBoys and have fond memories of GBA and other small games, you'll love PICO-8.

How to play PICO-8 cartridges 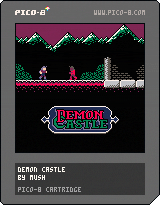 If you just want to explore, you can go to https://www.lexaloffle.com and just play in your browser! PICO-8 is a "fantasy console" that doesn't exist physically (unless you build one, more on that later). If you want to develop cartridges and play locally, you can buy the whole system (any platform) for $14.99, which I have.

If you have Windows and Chrome or New Edge you can just plug in your Xbox Controller with a micro-USB cable and visit https://www.lexaloffle.com/pico-8.php and start playing now! It's amazing - yes I know how it works but it's still amazing - to me to be able to play a game in a web browser using a game controller. I guess I'm easily impressed.

It wasn't very clear to me how to load and play any cartridge LOCALLY. For example, I can play Demon Castle here on the Forums but how do I play it locally and later, offline?

The easy way is to run PICO-8 and hit ESC to get their command line. Then I type LOAD #cartid where #cartid is literally the id of the cartridge on the forums. In the case of Demon Castle it's #demon_castle-0 so I can just LOAD #demon_castle-0 followed by RUN.

Alternatively - and this is just lovely - if I see the PNG pic of the cartridge on a web page, I can just save that PNG locally and save it in C:\Users\scott\AppData\Roaming\pico-8\carts then run it with LOAD demon_castle-0 (or I can include the full filename with extensions). THAT PNG ABOVE IS THE ACTUAL GAME AS WELL. What a clever thing - a true virtual cartridge.

One of the many genius parts of the PICO-8 is that the "Cartridges" are actually PNG pictures of cartridges. Drink that in for a second. They save a screenshot of the game while the cart is running, then they hide the actual code in a steganographic process - they are hiding the code in two of the bits of the color channels! Since the cart pics are 160*205 there's enough room for 32k.

A p8 file is source code and a p8.png is the compiled cart!

How to make PICO-8 games

The PICO-8 software includes everything you need - consciously constrained - to make AND play games. You hit ESC to move between the game and the game designer. It includes a sprite and music editor as well.

From their site, the specifications are TIGHT on purpose because constraints are fun. When I write for the PalmPilot back in the 90s I had just 4k of heap and it was the most fun I've had in years.

"The harsh limitations of PICO-8 are carefully chosen to be fun to work with, to encourage small but expressive designs, and to give cartridges made with PICO-8 their own particular look and feel."

The code you will use is Lua. Here's some demo code of a Hello World that animates 11 sprites and includes two lines of text

That's just a simple example, there's a huge forum with thousands of games and lots of folks happy to help you in this new world of game creation with the PICO-8. Here's a wonderful PICO-8 Cheat Sheet to print out with a list of functions and concepts. Maybe set it as your wallpaper while developing? There's a detailed User Manual and a 72 page PICO-8 Zine PDF which is really impressive!

And finally, be sure to bookmark this GitHub hosted amazing curated list of PICO-8 resources! https://github.com/pico-8/awesome-PICO-8 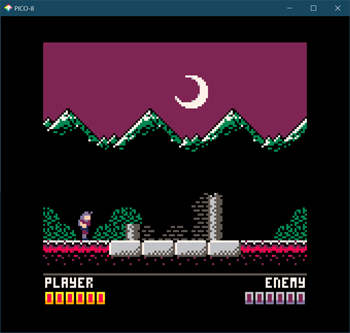 Writing PICO-8 Code in another Editor

There is a 3 year old PICO-8 extension for Visual Studio Code that is a decent start, although it's created assuming a Mac, so if you are a Windows user, you will need to change the Keyboard Shortcuts to something like "Ctrl-Shift-Alt-R" to run cartridges. There's no debugger that I'm seeing. In an ideal world we'd use launch.json and have a registered PICO-8 type and that would make launching after changing code a lot clearer.

There is a more recent "pico8vscodeditor" extension by Steve Robbins that includes snippets for loops and some snippets for the Pico-8 API. I recommend this newer fleshed out extension - kudos Steve! Be sure to include the full path to your PICO-8 executable, and note that the hotkey to run is a chord, starting with "Ctrl-8" then "R."

Editing code directly in the PICO-8 application is totally possible and you can truly develop an entire cart in there, but if you do, you're a better person than I. Here's a directory listing in VSCode on the left and PICO-8 on the right. 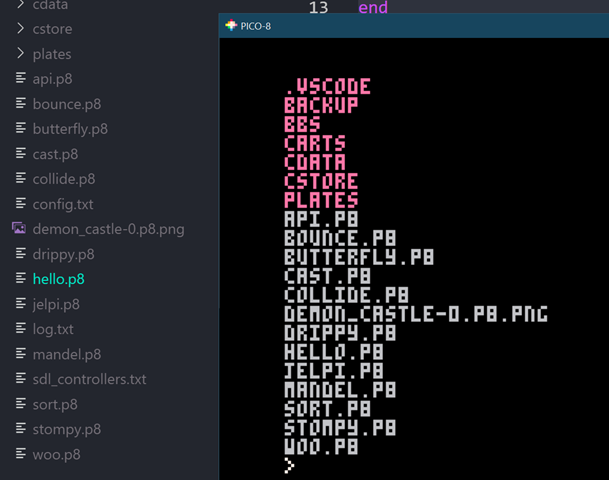 You can export to HTML5 as well as binaries for Windows, Mac, and Linux. It's a full game maker! There are also other game systems out there like PicoLove that take PICO-8 in different directions and those are worth knowing about as well. There is a rich tiny game development community out  there, and you'd do yourself a favor to explore sites like https://pigame.dev.

What about a physical PICO-8 Console

A number of folks have talked about the ultimate portable handheld PICO-8 device. I have done a lot of spelunking and as of this writing it doesn't exist.

For now, any PC, Laptop, or Rasberry Pi with a proper setup will do just fine for you to explore the PICO-8 and the world of fantasy consoles!

Sponsor: OzCode is a magical debugging extension for C#/.NET devs working in Visual Studio. Get to the root cause of your bugs faster with heads-up display, advanced search inside objects, LINQ query debugging, side-by-side object comparisons & more. Try for free!

Pete Brown
August 12, 2019 11:29
I've been meaning to learn machine code and write something for a C64 or Spectrum all these years. Perhaps this is a good stepping stone.

By the way Scott, noticed a slight typo:

"You can expert to HTML5"

Here's a typo 3rd paragraph from the top:

It's available on every platform, has one every award and is generally considered a modern-day classic.