The Weekly Source Code 44 - Virtu, an Apple Emulator in C# for Silverlight, WPF and XNA 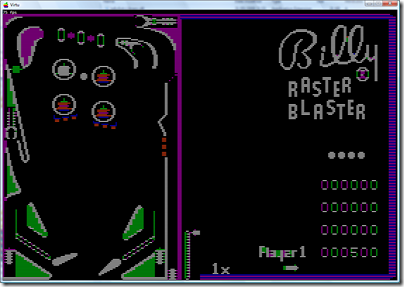 I love Emulators. They are magical. Earlier this year I interviewed Pete Brown when he created a C64 Emulator in Silverlight.

Now, it's Apple IIe time. From the Virtu Project Site, you can see that this source has been around in various forms for years...morphing from form to form.

Originally developed for RISC OS (3.11) on the Acorn Archimedes in 1995 using some C but mostly ARM assembly language. Published on the cover disk of the October 1997 issue of Acorn User. Later that year we started porting Virtu to Microsoft Windows (95) on the 'PC' using only C++ with DirectX. A port to Microsoft Windows CE (2.11) soon followed. These were tweaked over the next couple of years but never published. Fast forward to the present and the latest incarnation of Virtu, this time ported to the Microsoft .NET Framework (3.5 SP 1) using only C# with Silverlight, WPF and XNA (on both Windows and Xbox 360, which is limited to the .NET Compact Framework).

In this form, Virtu was written by Sean Fausett with some help from Nick Westgate. This code is interesting for a number of reasons. First, because it's a freaking AppleIIe emulator in a language I like to read (*cough* Not C *cough*), but also because it is cleanly structured and includes Silverlight (that means Mac also!), WPF and XNA (Xbox360) versions. It illustrates a way one can factor their code into an engine and various hosts.

IMPORTANT NOTE: To run, Virtu needs two files that are not included: An image of the standard or preferably the enhanced Apple IIe monitor ROM needs to be copied as 'AppleIIe.rom' (16 KB) to the Roms directory. An image of the Disk II (16 sector) interface card ROM needs to be copied as 'DiskII.rom' (256 bytes) to the Roms directory. You'll also need some disk in the form of a ".nib" file like RasterBlaster.nib, for example. I can't give you those files.

After a successful build, you should be able to run the emulator and perform a self test by pressing the hallowed key combination Control+OpenApple+CloseApple+Reset.

Looking at the WpfKeyboardService.cs, I can see how those keys I don't have are mapped to keys I do:

Looks like that's ALT, ALT, CTRL, F12 which gives me a weird series of self test screens then "System OK" which is a good sign. 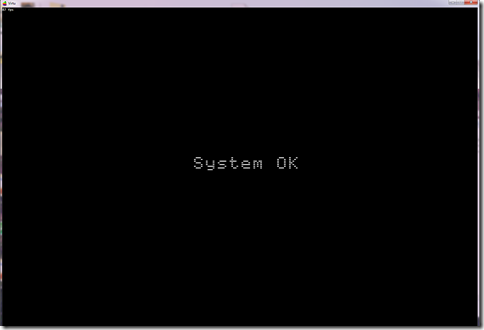 This is nice, now I can do a little Applesoft BASIC by booting to the monitor with Ctrl-F12 then typing this, then RUN.

It's really fun code to read and it's a lot cleaner than you'd think for an emulator, although there's the expected Giant Scary Switch Statements here and there. Other parts definitely feel like they've been brought along from the past, although, how else would you do them? (Don't look in VideoData.cs, your face will melt.) For example, here's how they draw text (remembering that we're not using Fonts here, we've got a REALLY low res screen):

In Silverlight, they use the same (only) technique that Pete Brown's C64 emulator used to use, the new WriteableBitmap class. This means the XAML is just a single Image, and everything is a dynamically generated Bitmap. Here's the SilverlightVideoService.cs:

It's a nice codebase and fun to step through. If you're interested in learning about emulation, check it out.

There are Wiki pages with details and quirks for each platform, WPF, XNA and Silverlight. There's still work to be done, so you might head over there and offer to help!

Time to break out the GOTO's, I say!

Matt
July 15, 2009 12:53
Why are the ROMs not distributed with the project? - I know (some of) legal side - but the only IP of any value in this ROM is educating the current and next generation of programmers....

AdrianJMartin
July 17, 2009 17:36
I have the same problem with this as I have with many awesome open source projects: lack of comments. A search through the WPF project reveals 695 comments. I'm not one to argue that any comments::lines of code ratio is a valid target, but I feel like a little extra effort could reduce the barrier to entry for new developers. Class, method, and property "this is what it does" comments aren't there on anything, let alone members that do something clever in the name of optimization. I'm staring at MachineEvents right now and all I can think about is how 3-4 sentences of comments would mean I don't have to hand-execute the code on paper to figure out what it's doing and compare that to what I think it's doing. I do have a compliment for the short comments in Memory.cs and Cpu.cs; those are very well done.

It's a shame that the only parts of the code that get comments are the parts that would be too hard for the developers to understand without comments. I know there's a "less comments" movment among many developers and I agree with many of its tenets, but I don't think "no comments" is a good path.

At least now i can teach my kids to program the way i learnt. Break out the CALL -151, 6502 machine code rocks!