Video: Twittering your Diabetes on NBC11 News in San Francisco 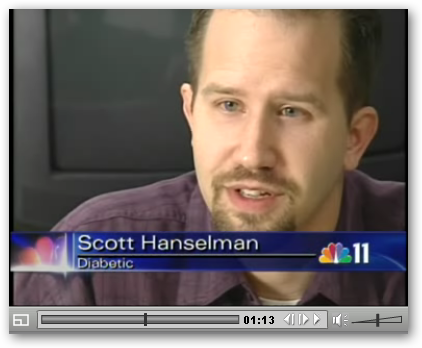 Hey look, it's me on NBC! Well, it's the local News in the San Francisco Bay Area (even though I live in Portland), but it's coverage!

Marianne Favro, the Health Reporter from NBC11 contacted me for an interview after hearing about Twittering My Diabetes , so I went down to the local NBC Affiliate and recorded a bunch of footage.

Of course the footage they used was the least awesome, including me saying (at one point during the 90 minutes) that diabetes "is wicked hard, and doesn't get any easier." It's magical how that kind of quote can get pulled out of an hour and a half of raw footage and make me sound like an idiot. ;)

Anyway, it turned out OK. The only major glitch is when they showed my Glucagon (sugar shot for major lows) and called it Insulin, but who notices that but me?

Go check out the Video up at NBC11 with the creative title: Diabetic uses Twitter.com. It also featured Biz Stone, one of the co-creators of Twitter.

Action Item and Note to Self: Come up with new Web 2.0 name like "Biz Stone" or "Guy Kawasaki", as "Scott Hanselman" is very Web 1.5. Any ideas?

See what I did there? That's quality. :)

"There's the right way, the wrong way, and the Maxx Power way!"

"Isn't that the wrong way?"

I'm glad you have the decency to make fun of yourself so that the rest of us don't feel so bad doing it :)

Great thing you are doing. I follow your blog for technical reasons, but I can share and relate your diabetes information to family members that are diabetic.

Keep up the good work.

Anyway, it's funny how they get 1.5 hours of interviewing on record and then use the 1-2 minutes that you least expect. Same thing happened to me when I was interviewed by my college alma mater. I read the article and did a WTF. Oh well, it's all good. :) Very cool that the story was done!

Scott Hanselman
June 08, 2007 19:04
First off this is really, really great stuff. Geeks can use their blogs to arm-wave, say stupid things, offer some code, but RARELY IF EVER can a geek make a difference like you have with this. I watched the video and I have to say - hat's off. Well done!

As for the name - Maybe go with the mysterious "is it an initial or not?" thing. How bout...

How bout an anagram of the last name?
Shna Manel

Or you could steal Phil's name:
P Haack.

Rob Conery
June 08, 2007 21:46
having 5 total syllables is key for marketing. usually in a 4-1 or 1-4 arrangement. Phoenetic spelling is also key, to save on domain names you need to register. Eye catching characters like K, Q, or Z are a plus.

I would be honored to have you and any other diabetics or people affected by diabetes reading this join TuDiabetes.com, a Social Network for Diabetics. See you there!

Burton
June 11, 2007 7:30
A completely unimportant point, but i'll raise it anyway.. gulcagon is not actually a sugar, it just aids in releasing stored suger, the opposite to insulin storing it. but yeah it does raise sugar so i spose it is the same as a sugar shot :)

We need the news everywhere to spend more time talking about stuff like this.