Windows Update on Vista x64 Ultimate woke up today and told me I needed a new video driver.  Since I was being very careful to not install anything unsigned or controversial, I didn't download any new drivers from the manufacturer's website.  It seemed to me that when Windows Update told me it had a new driver available, they wouldn't be that big a deal to get this new driver. 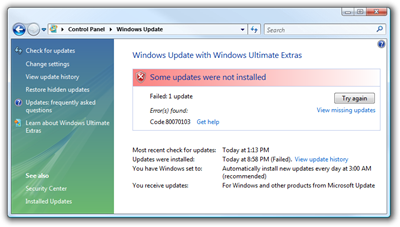 After much gnashing of teeth and flashing of my monitor, Windows Update announced that the update failed. Waa? That doesn't usually happen. I noticed the error code was a COM hResult with a link next to it. I though I was rid of those. Then I clicked the link and saw this.

This was a pretty interesting dialog because it told me:

"Go to the Discussions in Windows Update website to see if someone else has found a solution or to request help from other Windows users."

<sarcasm>Wow, that was helpful. </sarcasm> It also said:

"If you receive Windows Update error 80070103 while installing updates, you might be trying to install a driver that is already installed on your computer or a driver that has a lower compatibility rating than one you already have installed."

What's a driver compatibility rating? I would assume the Windows Update would only suggest compatible drivers that were the most not-controversial ones available.  In my experience Windows Update tends to be very conservative in these things.

Time to reboot and hope for the best.

But wow, i need to get some kind of a speech-to-text on my computer. If they work so well, I need a piece of the action. (Of course, i am still in the dark ages and am not running vista yet)....

Any quickies as to what is the best 'free' option for Windows XP?

Vaibhav
August 16, 2007 9:29
It's great that the hResults are shown. Finally something that you can hold on: when calling support or similar. Try to install a driver where a file is missing. You get a nice: "Some files are missing". That's helping a lot, isn't it ;)

Christian Liensberger
August 16, 2007 9:51
Christian - But why not just tell me what's wrong? Isn't that more useful than an hResult?

Scott Hanselman
August 16, 2007 21:57
I tend to agree with Christian: error codes can be handy for troubleshooting, googling, or searching knowledge base articles. You are more likely to find relevant results if you search for an error message and error code than just for the error message. Of course, it would be nicer if Windows Update were smart enough not to recommend incompatible drivers to begin with. [BTW, some people may not realize that Windows Update issues are subjects to free support. When my updates stopped working a few weeks ago, I submitted a support request and within a business day got a response with pretty detailed troubleshooting instructions the first step of which solved the problem (happened to be a corrupted COM registration).]

Alek Davis
August 17, 2007 21:52
I have to agree with Scott on this one. I always present the user with something they can do to fix the error. If necessary, I log log an hResult or Exception behind the scenes. But there doesn't seem to be any use in presenting the user with cryptic information they can do nothing about.