You can now download the new Open Source Windows Terminal

Last month Microsoft announced a new open source Windows Terminal! It's up at https://github.com/microsoft/Terminal and it's great, but for the last several weeks you've had to build it yourself as a Developer. It's been very v0.1 if you know what I mean.

Today you can download the Windows Terminal from the Microsoft Store! This is a preview release (think v0.2) but it'll automatically update, often, from the Windows Store if you have Windows 10 version 18362.0 or higher. Run "winver" to make sure.

If you don't see any tabs, hit Ctrl-T and note the + and the pull down menu at the top there. Under the menu go to Settings to open profiles.json. Here's mine on one machine.

You can do background images, even animated, with opacity (with useAcrylic off):

You can edit the key bindings to your taste in the "key bindings" section. For now, be specific, so the * might be expressed as Ctrl+Shift+8, for example.

Try other things like cursor shape and color, history size, as well as different fonts for each tab.

If you're using WSL or WSL2, use the distro name like this in your new profile:

If you like Font Ligatures or use Powerline, consider Fira Code as a potential new font.

I'd recommend you PIN terminal to your taskbar and start menu, but you can run windows terminal from the command "wt" from Windows R or from anotherc console. That's just "wt" and enter!

Remember that the definition of a shell is someone fluid, so check out Azure Cloud Shell, in your terminal! 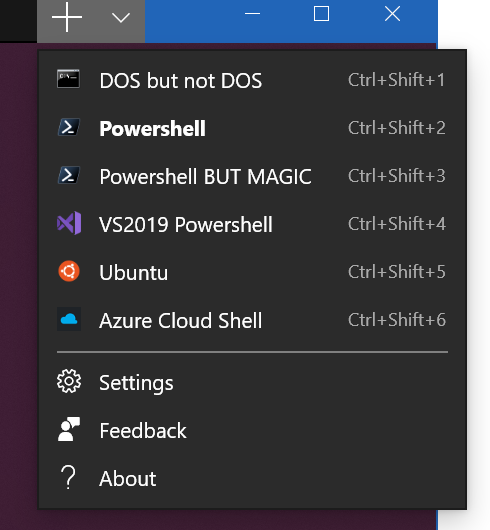 Also, let's start sharing nice color profiles! Share your new ones as a Gist in this format. Note the name.

Note also that this should be the beginning of a wonderful Windows Console ecosystem. This isn't the one terminal to end them all, it's the one to start them all. I've loved alternative consoles for YEARS, whether it be ConEmu or Console2 many years ago, I've long declared that Text Mode is a missed opportunity.

Remember also that Terminal !== Shell and that you can bring your shell of choice into your Terminal of choice! If you want the deep architectural dive, be sure to watch the BUILD 2019 technical talk with some of the developers or read about ConPTY and how to integrate with it!

Comment on this post [27]
Share on Twitter or Facebook or use the Permalink
June 22, 2019 2:04
Now if there was only a way to escalate privileges in cmd and Powershell equivalent to sudo or even better, sudo su. Otherwise, (as a non-developer but a power user) I still can't use Windows Terminal for the majority of the stuff that I use the command line for.

Like a lot of `Powershell <-> sh` commands, it's not a 1:1 mapping, but it does the job. Sometimes a bit better, sometimes a bit worse.

Miroslav Popovic
June 22, 2019 6:50
@joe - I’ve been using this sudo for Windows for a while - works great from cmd or powershell. Or even WSL bash with a little bash function to help out!

As for the new terminal - insta-install. I built from source, but haven’t used it full-time so far...

Stuart Dootson
June 22, 2019 7:01
This seems to be only available on Windows Store. Are there plans for a version available to people who prefer not to sign their device into a Microsoft Account?

1. In your settings Gist, where do you get the icons you're using from (and where do you have to place them)?
2. What's the correct way to get the VsDevPs.ps1 file used in your VS2019 profile? My VS2019 install doesn't appear to have that file.

@Gareth it's a standard msix (well, msixbundle including all architectures), so if you find a site that generates "direct download" links from the "Microsoft Store", you can just install it.

(quotes might be a good idea for what to search for...)

I love the live update of settings too.

Byron Adams
June 24, 2019 2:37
Would be nice if there were a backgroundImages C:\someImagesFolder that the terminal could cycle through like a slide show.

Byron Adams
June 24, 2019 8:39
Is there a page some where that lists and describes the various difference config settings?
I've taken a quick look on the Github page for the project (along with upvoting the UI and putting settings in user profile not in the horrible win app location) but can't really find it. I've also followed various links from this post.

Peter
June 24, 2019 15:54
I second Byron Adams comment - I typically will be in a folder and type either cmd or powershell in the address bar to open the respective shell in the current path. If this could also do that, it would be *perfect*

thismat
June 25, 2019 7:05
Is there any information on the update frequency of the preview version?

Patrick
June 26, 2019 7:46
Be warned that this version is unusable with most non-US keyboards, due to an issue that breaks all AltGr+key combinations.

GBWhatsApp
June 27, 2019 3:39
Why does this have to be a Windows Store app?! The worst platform ever created for anything.

Andrew
June 30, 2019 8:26
Agreed on windows store. Why??? I have windows 10 enterprise edition (from MSDN!) and it doesn't install, saying that my windows version is too old (but it's up to date according to windows update).

Thanks for the heads up, and do enjoy your day.