2010 Survey Results: What .NET Framework features do you use?

In October of 2008 I took an informal survey on Twitter. I wanted to get an idea of what features of the .NET Framework people were using.

Also, here's the disclaimer. I did this on a whim, it's not scientific, so the margin of error is +/-101%. That said, the results feel intuitively right to me, personally.

I put the poll out again last week, adding only Silverlight to the end as an option. I realize I could have added many other subsystems and choices, but I felt it would have made this new poll too different from the original. There's certainly many ways that it could be improved as a survey, but it's best to think of it more as a "which direction is the wind blowing" question, than a survey per se.

I also didn't push/promote this survey very hard, so it got only about 1250 responses, vs. the nearly 5000 from last year, but I've kept the same color and attempted to keep the scale so one could extrapolate trends visually. 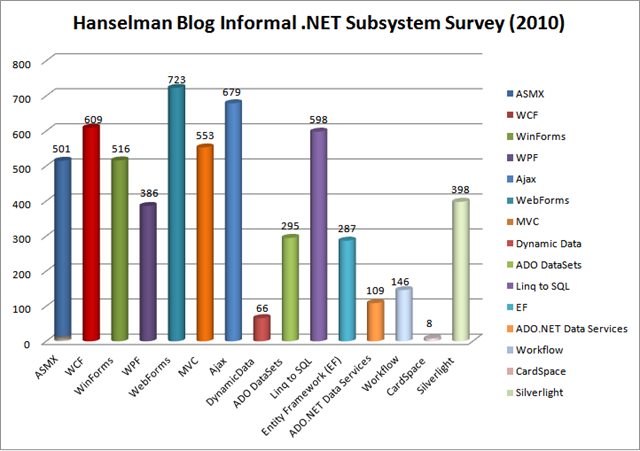 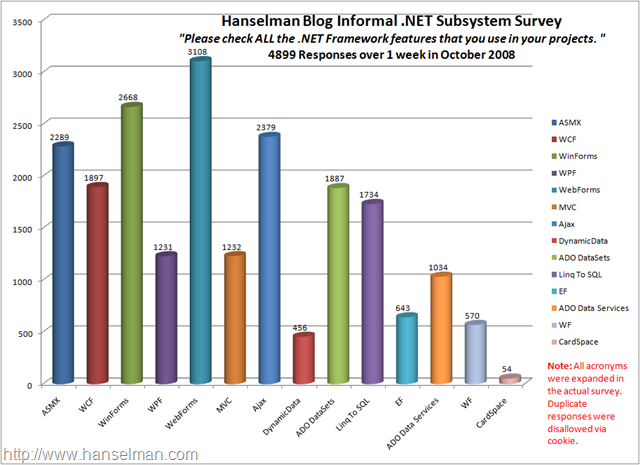 It's also worth noting that 'NHibernate' was written into the "other" option 24 times. The poll was taken with TwtPoll.

What are your conclusions and analysis?

Comment on this post [37]
Share on Twitter or Facebook or use the Permalink
January 15, 2010 3:35
Very interesting, although what's most interesting is that WebForms are still way up there. 'Legacy' business apps that don't want to switch to the MVC world I suppose?

darkhelmetlive
January 15, 2010 3:43
I find it strange that Dynamic Data users didn't increase with the way it has been exposed for validation.
Or maybe people didnt consider using the Dynamic Data framework that way?

@Scott, interesting survey. Glad to see MVC up there!

https://www.google.com/accounts/o8/id?id=AItOawkyQ6L_evGDw-LWsxlx4SMYGQe60dNQ6pk
January 15, 2010 3:49
Wow, look at the drop in Dynamic Data. It would be interesting to hear people's experiences with Dynamic Data in the comments. I've loved it, hated it, and been everywhere in between.

John Batdorf
January 15, 2010 3:53
I'm very surprised that the conclusions don't mention Ajax, the second highest bar, but it does mention Silverlight, which is less than 2/3 the size of Ajax.

Bertrand Le Roy
January 15, 2010 3:53
Thanks. Fun stats to look at. WebForms being the most used feature makes total sense to me. Despite all of the evangelism around WPF, Silverlight, and MVC I find that WebForms has been the technology most requested by clients. Reasons vary from place to place, with the most common being "don't want to retraing the team" to the more outlandish "Silverlight won't work for our problem space, which is as yet undefined".

Surprised to see DataSets still occupying such a big slice. Interesting to see EF and L2SQL face off though. :)

Stu Thompson
January 15, 2010 6:07
Nice! I would expect WF to be higher next year given that the model suits businesses quite well. Poor cardspace.

Thanks very much Scott for the survey! :)

https://me.yahoo.com/a/QcQTWk4KkuXYVYeJXDwkmat.p28yQsSHSE1g2w--
January 15, 2010 6:46
I'm not surprised by WPF/SL numbers being a bit sluggish. The trick still remains open, convince the masses to move off WinForms/WebForms for the new flavours of Microsoft Ice Cream :) heheh

https://www.google.com/accounts/o8/id?id=AItOawmWvVk4_--sEfG4wnTaPvL4SRZvcmgxyGc
January 15, 2010 7:53
In my humble opinion, the best set of features (collection of tools) for rapid development, low maintenance, and easiness are:

I highly recommend try this setup (you won't go back to anything else). The only downside is the learning curve and initial setup. After that, full steam ahead on rapid development.

William Chang
January 15, 2010 8:00
At least one conclusion is that Webforms ain't goin' anywhere for quite some time yet. Webforms are still relevant and useful, despite what many would have you believe (or wish to fool themsleves into believing).

Suck on that, ALT.NET fanboys.

Lee Dumond
January 15, 2010 10:39
Oh, I noticed that the people using WinForm is the double amount of the ones using MVC

Jack
January 15, 2010 11:23
The trend and lack of uptake of Dynamic Data is interesting. How many people are avoiding DD and pushing towards MVC and especially templating in MVC 2? DD never seemed to gain a critical mass of people actively talking about it to get a roll on.

@JohnB: I've had the same roller coaster with DD. It provided a quick win for starting a system but now as functionality grows I find myself replacing some bloated DD pages with MVC pages to reduce the complexity in the view layer and tease away the service and data layers. Good testament to being able to have the two frameworks coexisting in a single app though! Choice is good.

Jens Samson
January 15, 2010 12:48
Nice to see Webforms still up there. MVC is great, but way over-hyped and WebForms is stilly hugely relevant.

Andrei Rinea
January 15, 2010 13:49
The companies (legacy) using webforms with custom controls are finding ways to carry their control logic to MVC. Once the portability is easy then there will big difference in usage of Webforms nd MVC.. MVC shoots up

Hassan
January 15, 2010 17:42
Who's your target population? Your readers, Twitter followers? I'm wondering if these results would change if Microsoft sends an email to all developers in MSDN and a link is posted on StackOverflow.

Arthur
January 15, 2010 20:07
WebForms definitely aren't going anywhere - I keep reading so many good things about MVC, but in my opinion, simple applications are definitely easier to build and maintain in WebForms, and the learning curve of a brand new way of thinking is going to take years to reach everyone.

I do like to see that MVC usage is going up - it is a good technology, and it's nice to have the choice between the two going forward.

For me MVC + EF 4 is the winner in VS2010.
What I understand from the survey that majority of the people participated in the survay dealing with
ASP.NET + LINQ 2 SQL combo.

thanks for the info.
achu.

Achu
January 15, 2010 22:20
Great poll. Fascinating to stare at it and try to ferret out trends. (E.g. WPF gaining on Win Forms). I wish we had a crystal ball and knew what the distribution was for the vast armies of developers out there who are NOT forward-thinking, eager-to-learn-new-stuff, Hanselman-reading smarties. :O) The answers also change when you ask: what technologies do you use on new projects vs. what technologies are you using every day. These are two very different questions, with very different answers. So much legacy code out there, that successful technologies tend to have a long lifetime. (Ask me about being on a team that maintains a 15-yr old TCL codebase, among other things).

In my opinion, MVC and EF 4 is a good combo, but you have to look at the long term of maintainability/incresing complexity and visual studio GUI dependency. Comparing "mature" with EF 4 against NHibernate (ASPNET)/Hibernate (Java) that has 9 years of specializing in ORM, used by many enterprise applications, and support ridiculous amount database technologies (open eco-system).

I strongly agree LINQ overall is awesome, but if you're using the repository pattern with MVC, you won't have a problem switching and using NHibernate's current querying features: ICriteria, HQL, Native SQL, and LINQ (simple queries).

William Chang
January 15, 2010 22:51
One of the things that bothers me about adopting MVC is that one its main benefits - testability - is rarely discussed or shown in examples. I like some of the things that the MVC style brings (separation of concerns, yada yada, insert buzz words here), but I have way too much invested in WebForms to move to MVC. I could use MVC on new projects, but then I have two completely different technologies to support. I may use it for personal use, but don't plan to use it in our business apps.

http://toddwprice.myopenid.com/
January 16, 2010 6:26
You got very log ass page name to describe results. Any one SharePoint (another product down the toilet) ?

Developer
January 16, 2010 18:55
yes many people still not aware of the dynamic data is used. are probably the only one designed diyemi düşünoylar. funny

http://pompavehidrofor.blogspot.com/
January 17, 2010 19:31
1. How do you know your readership skews alpha?
2. If your readership is skewed, how does it affect the holistic results. Could we say that cardspace may be unpopular with your readers but very popular in the wild?

Achu
January 18, 2010 8:06
The result were quite obvious. However its good to find that people using LINQ and Silverlight are increasing. Good survey scott.

Nishit vaghela
January 19, 2010 9:39
am afraid why you didnt much vote for dynamic data

https://www.google.com/accounts/o8/id?id=AItOawkKL7PffVbNT30OHtFSNn0GIrV2OKRCfmU
January 19, 2010 9:50
am afraid to see why dynamic data is not on the list...

https://www.google.com/accounts/o8/id?id=AItOawkKL7PffVbNT30OHtFSNn0GIrV2OKRCfmU
January 22, 2010 2:20
I'm surprised WPF is gaining as much as it is. If I'm not using Silverlight, what advantage is there to me to target WPF, keeping in mind that the benefits have to offset the cost of requiring the 3.0/3.5 Framework.

I have a partial view that is rendered at ...mysite/Home/Index and there is another button on the page which opens a pop up(modal) that contains this control again... now in this pop I modify the view model of this partial view and on close it is updated, the view model has been updated but the HTML on the page has not, I have tried JQuery and Ajax approaches to avoid page refresh/reload as I have unsaved data on the page but niether updated the HTML(seen on view page source as I need to perform edit operation on the appended HTML).

https://www.google.com/accounts/o8/id?id=AItOawmLM2h-rrVEpsGiW2AwDjwjFUWiKdKi684
January 29, 2010 9:17
Here's the list sorted by most-used to least-used, in case anyone else wants to see it this way:

https://www.google.com/accounts/o8/id?id=AItOawnd04p-jYT0LRpgVF_zBUf9TcBI_jPd94Y
May 13, 2010 19:57
It would be more interesting if you had transform the numbers of anwsers to percentage of anwser relative to total.