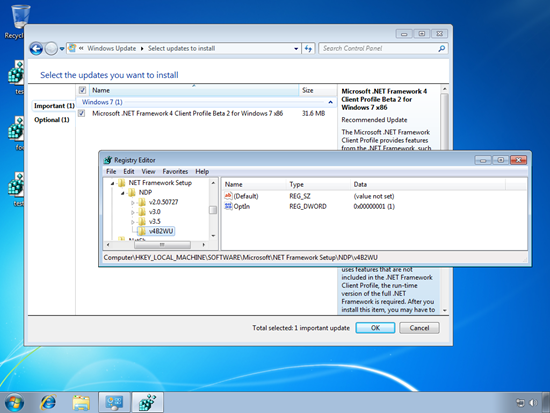 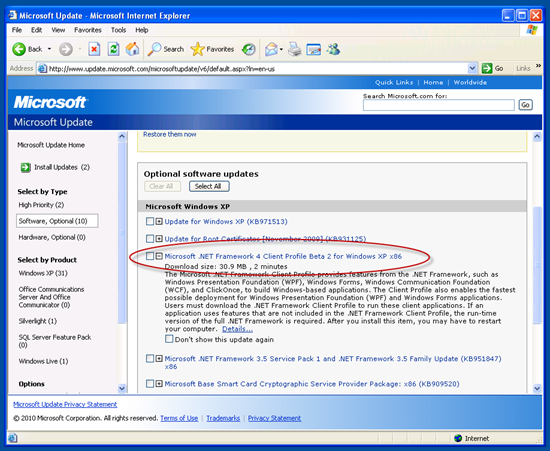 Comment on this post [37]
Share on Twitter or Facebook or use the Permalink
January 14, 2010 10:50
Hey Scott
thanks for the Heads up.
Turns out i was looking for this for some other reason completely so the registry opt-in hack is a time saver.

jake
January 14, 2010 10:59
IS this only though the Update site, or are we also testing WSUS distributions as well?

Richard Angus
January 14, 2010 11:03
The test seemed to go well, it installed perfectly fine, and now the system is waiting on me to hurry up and reboot. Will post back after the reboot.

https://www.google.com/accounts/o8/id?id=AItOawkSJDxKUBFc_t8E74gehDX2YNfIhRzgRnU
January 14, 2010 11:05
Richard - I'll ask the team to answer here, but as far as I know we're just testing WU.

Richard Angus
January 14, 2010 13:16
I've just done this on a Vista machine and an XP machine. Both have asked for a restart after the install, which is a pain in the backside.

Could we get an explanation of why this is? I'd understand it for an upgrade, but this was supposed to be side-by-side, so why does it need a restart? Are there *still* people at MS who are casual about asking for restarts, and if so could they please be sent out into the snow and asked not to come back?

Brian H. Madsen
January 14, 2010 13:58
It will NOT make any of your existing .NET apps run under .NET 4
So, what purpose is there in my installing it? Or is this simply to allow me to run apps that require the .NET 4 framework?

I tried it, but WU says "No Updates available". I am Using the german Version of Win7 32bit.

https://www.google.com/accounts/o8/id?id=AItOawno9RLk9HHNG9FhK-JVzeRN-sGlk8EpX98
January 14, 2010 16:43
I'm much more a fan of giving people a reg.exe command-line they can copy-paste into cmd/powershell - so much simpler and less error-prone IMHO, and has the bonus of letting them know about the very-helpful reg.exe that comes with Windows :)

https://www.google.com/accounts/o8/id?id=AItOawl0STDaBvn36gvonf8ovjXw3Oa17HS27w8
January 14, 2010 16:55
I believe the purpose is that MS doesn't believe in QA Test ing when they can get others to do the testing for them for free......Explains a lot.

Peb
January 14, 2010 17:58
Peb - if Microsoft didn't offer this you would be complaining that they don't do any 'real world' testing... they can't win for loosing some times.

Wayne
January 14, 2010 19:45
One related thing I'd like to get a handle on is what percentage of desktops is the .net framework 3.5 (with or without SP1) installed on? I haven't seen any recent numbers for this (there is a stackoverflow post that gives some numbers from the May timeframe I think) are there any internal Microsoft numbers you could share?

You are right. This means that any application that needs .NET4 to run will install faster (as it does not need to install .NET4 on your computer)

That makes me even more interested to know why both the machines *I* tried on required a reboot.

I had a bit of an issue with the VS install requiring a reboot in the middle of the process, which I'm learning now is most likely caused by the .NET 4.0 install. I think this process should be streamlined a bit better so the reboot is at the end of the VS install (especially since I highly doubt the install requires .NET 4.0, and if it does,hhhhmmmm maybe it shouldn't! it's an install after all).

http://www.pchenry.com/Home/tabid/36/EntryID/222/Default.aspx
If you care for more infomration, please read my review here.

There are some .Net Framework 4 installation scenarios that cause your computer to reboot. These scenarios are definitely a pain, and we are working very hard to minimize their impact on applications. In fact, we have whittled down the list of components that are capable of causing reboots to a mere handful and have spent considerable effort on minimizing the likelihood that they will cause problems in the future.

Though .Net 4 is a side-by-side release, there are a few files that it shares with previous frameworks. These files, called the Shared Components, are used to determine which version of the Framework should be loaded for a given application. Since these files were installed by previous frameworks, they might be in use by managed applications when we try to update them and thus cause reboots. I expect that your machines rebooted because they were both running apps that happened to use one of these Shared Components during installation.

The update will not get offered if you have a version of .NET Framework 4 already installed on your machine.
You can verify whether .NET 4 is installed by checking the keys below.

Also I'd check to make sure the optin regeky mentioned above is set correctly.

I have a Windows 7 x86 German machine and got the update offered this morning. Please let me know if you still run into any issue.

http://thao-doan.myopenid.com/
January 15, 2010 0:35
Installed just fine but I have to agree with others, having to Reboot after installing something that is New and not an Upgrade shouldn't force a Reboot. = Windows 7 Ultimate 32-bit

https://www.google.com/accounts/o8/id?id=AItOawmkd8aoZt3sc_AwYRovInoYMYBzAcyA1Y8
January 15, 2010 3:53
I ran the command line registry update, then checked windows update and it said no new updates available. Win7 x64. I do not have .NET 4 installed, I do have the May CTP of Oslo installed, not sure if that counts as .NET 4

https://me.yahoo.com/a/K3jkQGMx0Z_Vee8XP3rZafgkXHav_4R7kg--
January 15, 2010 5:32
If you are in a managed site (e.g., behind a WSUS server), you might want to scan for the update by selecting “Check online for updates from Microsoft Update”

Thank you for your reply! I was offered the update this morning! :-)))

Sébastien Giroux
January 15, 2010 21:07
I've implemented the registry change and applied the update. In case you're curious it's 48.5MB for Win7 Ultimate x64 and I did have to reboot.

I'm glad to see their will be offline install support for this version, as there have been a few scenarios where I had to distribute the entire .NET Framework 3.5 SP1 to a few customers running on closed networks.

@thao: Thanks, my first atempt did not work because I had VS2010 beta2 installed and the following regkeys in my registry:
NDP/v4/Full/...
NDP/v4/Client/...
and even a NDP/v4.0 with its default value set to "deprecated"...

Once I reset the Install value to 0 for both the client and the full setup, the download appeared in my Windows Update (and yes it is 48 Mb on my x64 Win7). It downloaded correctly then installed... Well it's kind of weird, because my .NET fx 4 was already up to date: 4.0.21006... Well I suppose I have to wait for next updates to note a difference.

I also checked VS2010B2 was not broken, and it wasn't, but here again I'll have to wait until the next real update to really test it.

https://www.google.com/accounts/o8/id?id=AItOawmyKx5rtvV1vOXNTK0qJJFp124PDCPBhL4
January 16, 2010 19:28
I ran the command line registry update, then checked windows update and it said no new updates available. Win7 Ultimate x64. I do not have .NET 4 installed, Nor have I installed any of the 2010 Betas. I have VS2005 and VS2008 installed. I ran the regedit file yesterday afternoon and since it hadn't show up, I just did a "check for updates" and it told me my computer was up to date.

Can't wait for .NET 4 to be out of beta. I am especially pumped up about MVC 2. Remember the old days when we used to walk ten miles to school in the snow without shoes and we developed websites with WebForms....LOL

Michael Ceranski
February 11, 2010 11:27
Avoiding a reboot is very important. If a 3rd party app or service is running that depends on .NET, can these apps or services be requested to close or stop when .NET 4 is installed? Certainly for services and applications that are restart-aware, this seems like an appropriate solution. When the .NET 4 install completes it can restart the processes.