It's live and you can give it a try now! Ten minutes ago Shawn and Scott released the hounds. If you'd like to step through .NET Framework Source code, here's what you need to do.

That's it. Crazy. You can get more detail on Shawn's post if you need it. Here's me, just now, stepping into XPathNavigator's GetNamespacesInScope method.

Do note a few things. 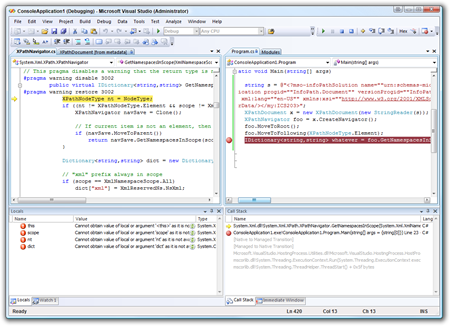 "None of the products that are addressed by this software update are installed on this computer. Click Cancel to exit setup."

However, I definitely have VS2008 installed, running Windows Server 2003.

Ken Robertson
January 17, 2008 4:28
I prefer to leave "search only when symbols are loaded manually" unchecked. Less to think about when debugging.

Tobias Hertkorn
January 17, 2008 17:24
That's pretty much what "search only when symbols are loaded manually" is, isn't it? It's "Just My Code" debugging with the option to dig into the framework source for those 1% cases.

Lucas Krammes
January 17, 2008 21:27
yeah, sorry, didn't make that clear enough in my post. What I don't like while using the "search the above locations only when symbols are loaded manually" that I now have to know exactly where the object I am trying to step into is located (by hitting F1, waiting for the help to pop up, go to the class definition and looking up the assembly, hitting ctrl+alt+u, right clicking assembly, hitting load symbols). Or I have to know which dll's also have pdb's, in order to avoid the "Find Symbols" file selection dialog that pops up when I am trying to load the symbols for a dll that is not supported.

ah, whatever, I love the new functionality. :)

Every now and then as I browse the source I see a few instances in a file where the code style seems to change, e.g. pretty much all methods put the opening { on a new line, then out of the blue there will be one on the same line as the sig...I wonder if this is the result of some tool that all this has been ran through, or whether it is the remnants of an employee who refused to change their style! :-)

Granville Barnett
January 18, 2008 2:08
Is there anyway to access the source code on a computer that doesn't have internet access (it is connected to an isolated network)?
i.e. can we download the source and install it on the isolated network ?

The content that you requested cannot be found or you do not have permission to view it.

If you're having trouble installing the QFE and you had VS2008 Beta2 on your machine at some point, try running the QFE with the VS2007 DVD in your drive (or it's ISO mounted).

What is the legal status on the Microsoft side for such a tool?
As far as i see from the licence, there is no such a term that disallows this.

The tool can download whole the source code to the local and allows offline debugging in VS2008 and VS2005 without any addons installed.

Welcome to the .NET Mass Downloader project. While it’s great that Microsoft has released the .NET Reference Source Code, you can only get it one file at a time while you’re debugging. If you’d like to batch download it for reading or to populate the cache, you’d have to write a program that instantiated and called each method in the Framework Class Library. Fortunately, .NET Mass Downloader comes to the rescue!

Using .NET Mass Downloader
Open a command or PowerShell prompt and navigate to where you extracted the current release. The tool itself is NetMassDownloader.exe and when run without parameters shows the following help screen:
.Net Mass Downloader 1.0.0.0 - (c) 2008 by Kerem Kusmezer, John Robbins

-file - Download an individual file's PDB and source code. You can
specify multiple file parameters. (Short -f).
-directory - Download all the found PDB and source code for all files in
the specified directory. You can specify multiple
directory parameters (Short -d).
-output - The output directory for PDB and source files. The default
directory is the cache directory set in Visual Studio 2008.
By using the cache directory, you'll have the PDB and source
files available to Visual Studio 2008. However, to use the
.NET Reference Source Code with VS 2005, use the -output
switch and in the Options dialog, Debugging, Symbols property
page, add the specified output directory to the "Symbol file
(.pdb) locations." Also, add the directory to the Solution
Properties, Common Properties, Debug Source Files, Directories
containing source code location. The Visual Studio 2005
debugger will automatically load the source code. (Short -o)
-vsver - The Visual Studio version number to use for finding the cache
directory. The default is Visual Studio 2008,
but if you want to use the cache directory for Visual Studio
2005, you would pass '-vsver 8.0' (without quotes) (Short -vs)
-force - If specified, forces the downloading the PDB files into the
symbol server. When downloading to a symbol server if the PDB
exists, it's not downloaded. Using the -output switch will
always download and process the PDB. (Short -fo)
-nologo - Don't show the logo information. (Short -n)
-verbose - Do verbose output. May be worth turning on as the downloading
source code can take a long time. (Short -v)
-? - This help message.
The only required arguments are –file or –directory, both of which can be specified as many times as you’d like. When you specify a directory, only the .DLL and .EXE files from that directory will be processed. If you wanted to download all the source code from binaries in the .NET 2.0 32-bit and 64-bit directories, the command line you’d pass is: -d C:\Windows\Microsoft.NET\Framework\v2.0.50727 –d C:\Windows\Microsoft.NET\Framework64\v2.0.50727.

When you first run Net Mass Downloader, you will be prompted with the current EULA for accessing the source code. If you don’t agree with the Microsoft EULA, clicking the Decline button will not download the source code.


Acknowledgements
Thanks to the Developer Division at Microsoft. First they released the .NET Reference Source Code, and second for allowing a couple of developers to have some fun and provide a utility for the community. Thank you for using .NET Mass Downloader. We just ask that you log any bugs and features into the project Issue Tracker.

If you have questions about particular pieces of the code, Kerem Kusmezer did the following parts: the PE (Portable Executable) Parser, the PDB Parser, the Webclient Class. and the SrcSrv class. John Robbins did the console driver, testing, and served as Kerem's code monkey.