Blogging to DasBlog from Word 2007 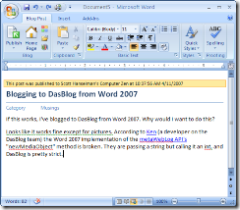 If this works, I've blogged to DasBlog from Word 2007. Why would I want to do this?

Looks like it works fine except for pictures. According to Ken (a developer on the DasBlog team) the Word 2007 implementation of the metaWebLog API's "newMediaObject" method is broken. They are passing a string but calling it an int, and DasBlog is pretty strict.

I can see where I might find myself on a computer that had only Word 2007, and rather than using the Web Interface I might want to blog from Word.

There's also the comfort level - that seems to me to be the most compelling reason. Word is comfortable, and being able to post to one's blog here would be very natural for most writers who live in Word already.

I might set this up for my wife as she's already comfortable with Word and Office. We'll get the picture/media thing worked out and I'll have Mo give it a try.

Comment on this post [13]
Share on Twitter or Facebook or use the Permalink
April 11, 2007 21:44
Well, I don't know about you, but I do it for the ease of editing that Word gives me. I can't wait for you to dish out your advice on how to make the most of it.

Vaibhav
April 11, 2007 21:48
Another reason for why you might want to do this is because you are testing XmlRPC support in DasBlog (to the best of my ability, I think that is what Word 2007 uses for blogging, then again I suck at these things)...

Vaibhav
April 11, 2007 21:50
Well I blog to Wordpress, and have never had any problem with pictures, but that may be because the Wordpress engine might not be as strict as DasBlog.

Vaibhav
April 11, 2007 21:56
The reason I really like it is the same reason for why I would rather type out an email on Outlook and send it out when I am ready as compared to typing it onto a web based mail composer. Also, in India, the internet speeds are not all that zippy, so making multiple saves on a web-based interface are cumbersome (for that matter, even the initial loading of the composer is cumbersome).

Which is why doing it from Word rocks....

Vaibhav
April 11, 2007 23:00
So did you get the pictures posted there via newMediaObject or via FTP?

Aaron
April 11, 2007 23:19
Same problem we had with Subtext and my company's internal blogging software. Pretty annoying stuff since there is a spec to follow. ;)

on another subject:
I've taken difficult table based designs in Word, saved them in .html, opened them in Macromedia (the "other" IDE) and clicked on the Command, "Strip Off Extraneous Word Stuff". I think that is what it's called. From there I have a very clean html representation of something I could only design in Word.

John A. Davis
April 12, 2007 0:14
That's pretty sweet. I've always been leary on doing that because the markup Word produces has always been....sub-par at best. The crazy amounts of HTML markup they would do to create a page was almost infuriating since it was hardcore overkill and only worked in IE.

I made a try when I installed Office 2007, and I was really happy to see it worked. But, there is a problem when you try to post a picture, but it is not an issue in DasBlog.
If you host your DasBlog at Brinkster (just an example), it will probably not work because to post pictures on the blog, you have to specify the FTP stuff (username, pwd, remote folder, etc). This is fine unless you have a username containing a backslash "\". Indeed, at brinkster, the usernames (at least mine) are in the format "brinkster\username" and Word can not publish the pictures using FTP, saying that it could not log-in.
Otherwise, on other installations of DasBlog, it works perfectly !
Again, good job from the DasBlog team !

Yves Peneveyre
April 12, 2007 0:53
Thanks Yves...we know that we can do the FTP stuff and that it works in Word...what we're talking about it getting images and stuff uploaded WITHOUT FTP, via Port 80 and over HTTP. This allows folks to blog within companies that have locked down FTP access, line mine.

Scott Hanselman
April 12, 2007 22:58
Yeah, it's worth pointing out that the 'broken' bit of blogging from Word 2007 to dasBlog was only the newMediaObject (the bit that allows a user to upload pictures etc without having to configure FTP details) everything else worked OK (text only posts)..

A fix (courtesy of Nick) is now in the latest source.

Ken Hughes
April 28, 2007 1:35
I'm sorry guy ... but I don't understand if Subtext allows to post images or not through port 80 in word 2007. A simple test fails.
If it's possible can somebody be so kindly to write me an e-mail at googlegroups [at] cleanmail . it and explain how
Thanks
Andrea