March 02, 2009 Comment on this post [5] Posted in Back to Basics | Learning .NET | Musings | Open Source | Screencasts
Sponsored By

The unusual (and powerful) thing about Open Space is that you don't pre-plan a list of activities and speakers. Instead you provide a basic skeleton of time and space, and the attendees figure out what actually happens. The result is a more participative and energetic event.

In April of 2007, David Laribee coined the phrase ALT.NET after reading a post by Scott Bellware about the NHibernate Mafia. The core message David was keying off of was the maintainability of a software solution and not the tools involved in creating it.
ALT.NET means many things to many people and the debate will continue about what it means to you.
David proposed ALT.NET signifies:

Robert Scoble introduced me to Kyte.TV last week after he moved a Twitter conversation we were having out of the constrained space of Twitter and into a live video stream with a chat window. As an experiment I recorded a "Hanselminutes Live" using Kyte and it was pretty fun. Fast forward to ALT.NET a week later and I'd forgotten about this. Then I noticed a number of folks on Twitter saying "wish we were there!" I had my webcam with me so I started streaming the sessions I was attending live using Kyte. 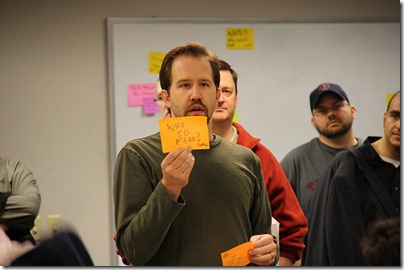 You can also click the "Shows tab in the embedded interface below:

Comment on this post [5]
Share on Twitter or Facebook or use the Permalink
March 02, 2009 10:05
That's cool. Hopefully all of these will start being recorded and made available. There is a code camp coming up in Orlando at the end of this month and I hope a few people make this effort as well.

What type of connection did you have to push the stream to Kyte? I don't think the code camp will have internet access but I have a wireless modem with an upload speed of about 156-200k (download is almost 900k).

Petar
March 03, 2009 11:52
I said it before in my post that you linked to above, but I'll say it again for the benefit of people who don't click through to read it: what you did for those of us unable to attend in person by your impromptu FPS-like traveling through the halls, inspecting the session board, and yes -- even wandering through the crowds in real-time was nothing short of an inspiration -- it was a blast to attend that way.

We can talk about the 'quality' of the A/V or the bandwidth limits that were experienced by all, but you managed to really deliver on the experience of the conference in a way that was really eye-opening for me and sets the bar for other conferences (and other attendees) to do the same.

My only question to you is: did your work on this aspect of helping the rest of us attend remotely degrade at all from your own experience at the conference --? (e.g., did you find that futzing with the camera, the sound, the chat window, etc. distracted you from being able to enjoy the conference yourself at all?)

As always, keep up the great work~!

Note also that I didn't PLAN to do this. I just noticed on Twitter how many people wish they were there, and I figured, gosh, that sucks and hooked up the only webcam I had. If I'd planned it, I'd have brought the right equipment. :)

I know, I know - ask me! It's my colleague Peter Kleine at Dotway who designed it for our ALT.NET community in Oresund and published it under Creative Commons!

Where can I get this very fine piece of art?

Read all about that here: ALT.NET Logos under Creative Commons Licence! Go get it and use it for your ALT.NET Community if you please! ;~)

Alright enough with the commercial spot! Thanks Scott for making my colleague proud and happy yet humble!