UPDATE: It appears that what we suspected is true, Windows understands one set of DST rules. Whatever the current DST rules are are applied to all dates. This doesn't make sense to me as that would make the 2005 test below fail also, and it doesn't. More as it comes in.

UPDATE#2: Seems that a new "Dynamic DST" section is added for future OS's, like Vista, for handling future DST time changes. This change will affect all Windows OS's equally - that is, you don't need to custom code for one OS versus another. If congress, in their infinite wisdom, decides to change the laws of Time and Space again, Vista and other OS's will require only a registry change, and past time rules will still apply. Thanks to Tim Heuer for helping puzzle through it all.

One of our Architects at Corillian, Paul Gomes, led the team that designed our .NET-based OFX Banking Server. That product happens to have ridiculously good Code Coverage and a metric-crapload of Unit Tests. Recently a build server had the Daylight Savings Time (DST) Windows KB928288 patch applied. Immediately an internal Date-related test failed.

Paul dug into it and boiled it down to this simplified test that takes a date in March of 2006 and converts it to GMT.

The output is interesting. Note that we're comparing strings in this case for clarity.

I first thought that this was no problem and I said to Paul: 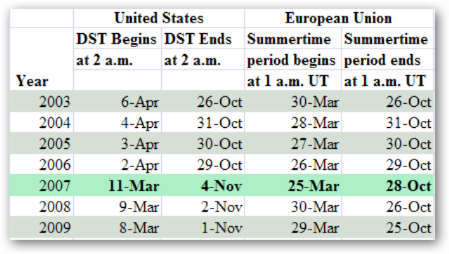 What are we missing, dear reader? Is there a problem (bug?) with the registry-based Windows DST Patch?

I'm leaning towards assuming it's us, but I wanted to ask you. It seems that the data points towards this patch not working with dates in 2006. Not a huge deal, but non-trivial,IMHO.

As an aside, but very slightly related note, Steve Harman had an interesting bug where his Unit Tests were expecting to see "Tijuana" at the end of his TimeZone's Display Name. Since Mexico isn't following our lead (if it could be called a "lead") and changing their DST, so Tijuana isn't in PST proper anymore.

It's apparently a bug by design.

orcmid
February 08, 2007 20:50
I don't think that the patch is broken, but rather the implementation of how timezones (and their daylight savings adjustments) are configured in the registry. I don't believe there is a history to the setting. Check out HKLM:\software\microsoft\Windows NT\CurrentVersion\Time Zones and look at your favorite time zone.

There is a TZI item that holds the information on when to change the clock. There is a place for the month and the day (if you've applied the patch, you will see a 3 and a 2 in there, indicating the 2nd Sunday of March as well as a 1 and an 11, indicating the 1st Sunday in November. I don't know what the rest represent :).

However, I don't believe it has an associated year with the setting. So, when these values are changed, the system believes that the clock has changed and will change on those days every year.

Now, whether or not the framework is trying to do some other calculations on top of this is left up to someone else to investigate.

Mark - That's odd...if that was the case, it'd be failing on ALL past dates.

Scott Hanselman
February 08, 2007 23:10
Scott,
Mark is right - DST boundaries have no history in versions of Windows before Vista.

I don't want to chase a rabbit, but: What version of Windows and Framework is this running against?

"On the blog they are testing with March 12. That isn’t the best day to use, because that is right around the period when the new DST begins. In 2006 March 12 is the date while in 2005 it is not in (new) DST rules.

DST is now defined as second Sunday or March, so for 2005 that day is outside of the extended DST period.

They are correct in that there is only one definition of DST (year independent) and it applies to the past and future, so since we changed for 2007 items from the second Sunday of March to first Sunday of April is previous years could be off, because they are in the extended DST period, but that year never had it"

Scott Hanselman
February 09, 2007 0:44
Ok, now I definitely give up on computers and I'm moving out into the woods with a big stick and some rocks. All the calculations and stuff aside, it seems to me that Microsoft would have made this a bit of a higher priority and tested the tar and everything else out of it. When three OS's from the same company produce different results with the same test code something sparks of MAJOR inconsistencies.

I'm going to have to play with these tests myself and see what I see just to make my head hurt a little more... ;)

In thinking about this, instead of using a single entry to designate DST, why not use multiple entries? This of course would require a history of changes to DST. But isn't that readily available via a Google search? A "table" of the current system timezone and all DST data regarding historical changes could easily be implemented and "popped" into place for the OS to check and create its calculations based on the current system date and use for any other dates passed to these functions.

This is obviously a simplistic view and maybe approach, and possibly not even viable for anything below a new OS due to possible dependency issues, but it makes some kind of sense to me.

</soapbox> (hopefully that wasn't interpreted as HTML... can't tell until I click Save.)

John Baughman
February 09, 2007 1:39
This is the reason MS added the dynamic time zone info to Vista.

I'd bet good money that the lawmakers who decide to do things like change the DST dates have no clue what the actual ramifications will be.

Kevin Dente
February 09, 2007 6:25
Kevin's right - the apparently simple ramifications of a piece of legislation like the Energy Policy Act of 2005 spread throughout the world. But if you think that was bad, take a look at Western Australia that, in the final event, got just over 2 weeks notice that they were starting daylight saving time on December 3, 2006 (OK - they knew about if for a while before, but the legislation was finally signed 2 weeks before). MS have a patch out there for that too. Oh, and next year, that date will be the last Sunday of October, like the rest of Australia.

Watch out folks for the other time zones around the world that have had their display names changed by this fix, and the boatload of new timezones that have been introduced to cope with new political realities, especially in Eastern Europe.

All in all, it's not simple ... and this isn't the end. There will be ongoing changes in these definitions in the years ahead. And did anybody note that there is a clause in the US Energy Policy Act that calls for evaluation in a few years, at which time we might revert to the previous definitions :-)

Adrian Pell
February 09, 2007 12:11
Which systems have they released patches for? I'm assuming XP, 2k3, and Vista, but are they going to release a patch for win2k? I'm pretty sure NT is out. Anyone know of a 3rd party patch? We still run a LOT of NT machines here at work... (Yes, we have plans to get rid of them, but the majority of them aren't going anywhere before March.)

Tim Coker
February 09, 2007 18:47
Tim,
From what I've heard, there will be no official patch for 2000 and before. There are, however a couple of solutions for those platforms.

Kevin Dente
March 01, 2007 4:02
I had ran DST patch(KB931836) for Windows XP sp2 on my m/c and ran the test suggested by Scott.I got the same results.
I was just trying to analyze the same and found that:
I can see two STRINGS under EST in registry
"HKEY_lOCAL_MACHINE\SOFTWARE\MCROSOFT\WINDOWSNT\CURRENTVERSION\TIMEZONES\EASTERN STANDARD TIME\DYNAMICDST" -- 2006 AND 2007.
As per the comments mentioned in blog, DST is year independent.Can somebody explain be the significance of "2006" and "2007" in registry?I persume that for any dates before 2007 will be taken care by "2006" registry entry and any date from 2007 to future will be taken "2007".
Additionally can somebody explain the area of concerns if DST is not considering YEAR for time calculation.