Do you like a big pile of source code? Well, there is an imperial buttload of source in the Visual Studio 2010 and .NET Framework 4 Training Kit. It's actually a 178 meg download, which is insane. Perhaps start your download now and get it in the morning when you get up. It's extremely well put together and I say Kudos to the folks that did it. They are better people than I.

I like to explore it while watching TV myself and found myself looking through tonight. I checked my blog and while I thought I'd shared this with you before, Dear Reader, I hadn't. My bad, because it's pure gold. With C# and VB, natch.

Here's an outline of what's inside. I've heard of folks setting up lunch-time study groups and going through each section.

I love using this kit in my talks, and used it a lot in my Lap Around .NET 4 talk.

There's Labs, Presentations, Demos, Labs and links to online Videos. It'll walk you step by step through loads of content and is a great starter if you're getting into what's new in .NET 4.

Here's a few of my favorite bits, and they aren't the parts you hear the marketing folks gabbing about.

Remember the old coding adage to "Assert Your Expectations?" Well, sometimes Debug.Assert is either inappropriate or cumbersome and what you really need is a method contract. Methods have names and parameters, and those are contracts. Now they can have conditions like "don't even bother calling this method unless userId is greater than or equal to 0 and make sure the result isn't null!

Code Contracts continues to be revised, with a new version out just last month for both 2008 and 2010. The core types that you need are included in mscorlib with .NET 4.0, but you do need to download the tools to see them inside Visual Studio. If you have VS Pro, you'll get runtime checking and VS Ultimate gets that plus static checking. If I have static checking and the tools I'll see a nice new tab in Project Properties: 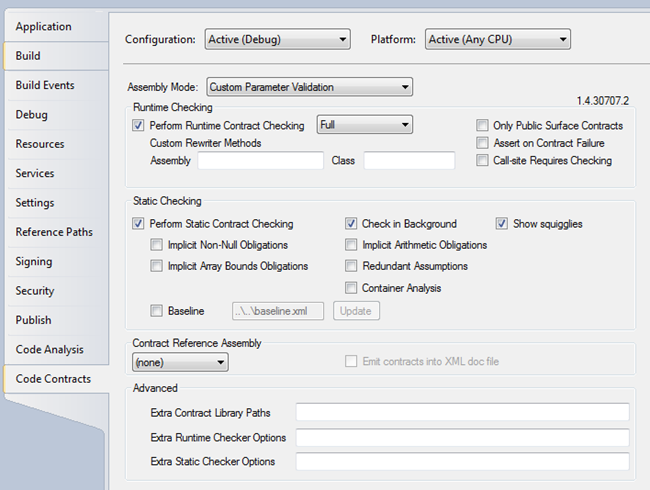 I can even get Blue Squigglies for Contract Violations as seen below.

As a nice coincidence, you can go and download Chapter 15 of Jon Skeet's C# in Depth for free which happens to be on Code Contracts.

Here's a basic idea of what it looks like. If you have static analysis, you'll get squiggles on the lines I've highlighted as they are points where the Contract isn't being fulfilled. Otherwise you'll get a runtime ContractException. Code Contracts are a great tool when used in conjunction with Test Driven Development.

I did a lot of COM Interop back in the day and it sucked. It wasn't fun and you always felt when you were leaving managed code and entering COM. You'd have to use Primary Interop Assemblies or PIAs and they were, well, PIAs. I talked about this a little bit last year in Beta 1, but it changed and got simpler in .NET 4 release.

Here's a nice little sample I use from the kit that gets the Processes on your system and then makes a list with LINQ of the big ones, makes a chart in Excel, then pastes the chart into Word.

If you've used Office Automation from managed code before, notice that you can say Range[] now, and not get_range(). You can call COM methods like ChartWizard with named parameters, and without including Type.Missing fifteen times. As an aside, notice also the default parameter value on the method.

You can also embed your PIAs in your assemblies rather than carrying them around and the runtime will use Type Equivalence to figure out that your embedded types are the same types it needs and it'll just work. One less thing to deploy.

The #1 reason, IMHO, to look at .NET 4 is the parallelism. I say this not as a Microsoft Shill, but rather as a dude who owns a 6-core (12 with hyper-threading) processor. My most favorite app in the Training Kit is ContosoAutomotive. It's a little WPF app that loads a few hundred thousand cars into a grid. There's an interface, ICarQuery, that a bunch of plugins implement, and the app foreach's over the CarQueries.

This snippet here uses the new System.Threading.Task stuff and makes a background task. That's all one line there, from StartNew() all the way to the bottom. It says, "do this chunk in the background." and it's a wonderfully natural and fluent interface. It also keeps your UI thread painting so your app doesn't freeze up with that "curtain of not responding" that one sees all the time.

StartNew() also has a cancellation token that we check, in case someone clicked Cancel midway through, and there's a ContinueWith at the end that re-enables or disabled Search button.

Here's my system with the queries running. This is all in memory, generating and querying random cars. 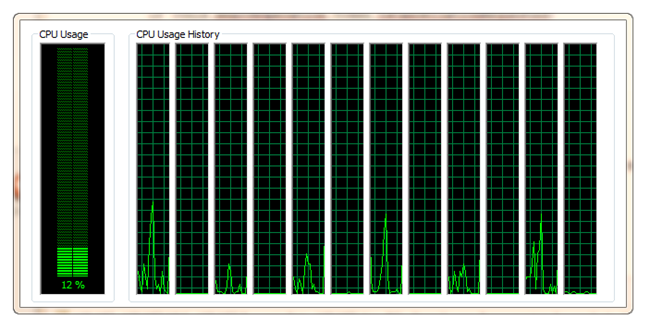 And the app says it took 2.3 seconds. OK, what if I do this in parallel, using all the processors? 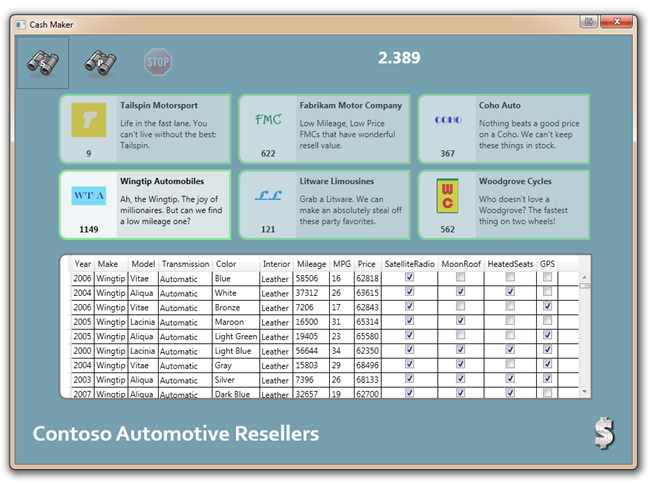 Here's the changed code. Now we have a Parallel.ForEach instead. Mostly looks the same.

This code says "go do this in a background thread, and while you're there, parallelize this as you like." This loop is "embarrassingly parallel." It's a big for loop over 2 million cars in memory. No reason it can't be broken apart and made faster.

Here's the deal, though. It was SO fast, that Task Manager didn't update fast enough to show the work. The work was too easy. You can see it used more CPU and that there was a spike of load across 10 of the 12, but the work wasn't enough to peg the processors. 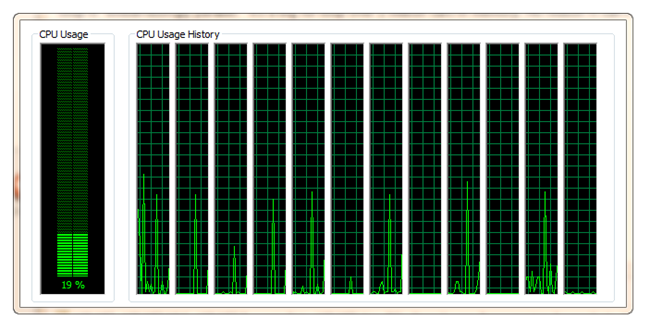 Did it even make a difference? Seems it was 5x faster and went from 2.389s to 0.4699 seconds. That's embarrassingly parallel. The team likes to call that "delightfully parallel" but I prefer "you're-an-idiot-for-not-doing-this-in-parallel parallel," but that was rejected.

Let's try something harder. How about a large analysis of Baby Names. How many Roberts born in the state of Washington over a 40 year period from a 500MB database? 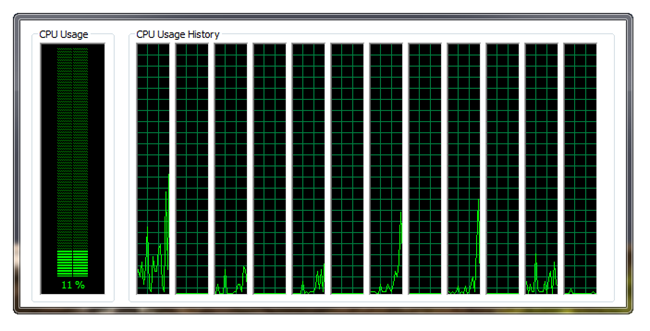 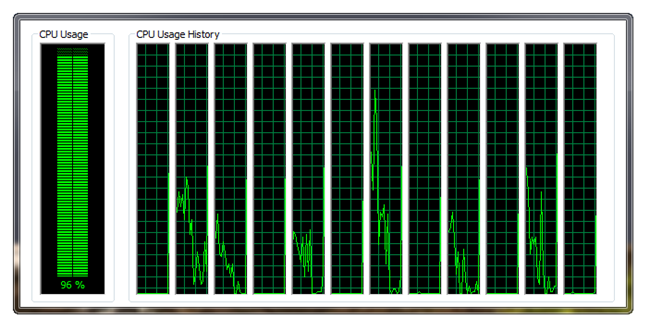 And here's the timing. Looks like the difference between 20 seconds and under 4 seconds. 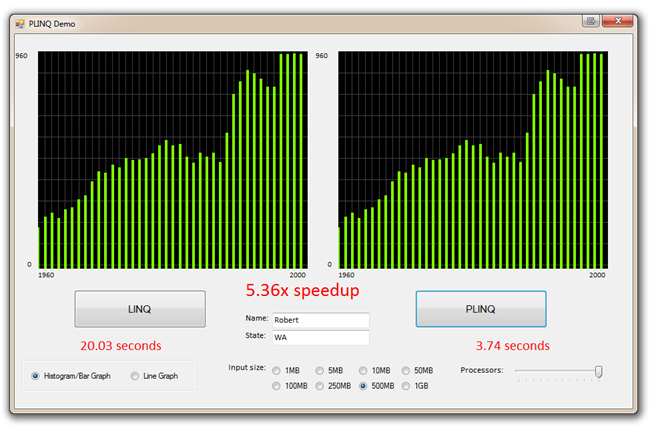 You can try this yourself. Notice the processor slider bar there at the bottom.

This sample uses "Parallel LINQ" and here's the two queries. Notice the "WithDegreeofParallelism."

The .NET 4 Training Kit has Extensibility demos, and Office Demos and SharePoint Demos and Data Access Demos and on and on. It's great fun and it's a classroom in a box. I encourage you to go download it and use it as a teaching tool at your company or school. You could do brown bags, study groups, presentations (there's lots of PPTs), labs and more.

Hope you enjoy it as much as I do.

I think the VS Premium will give you the static checker also (pro>premium>ultimate). You state its in the ultimate.

Now, what puzzles me that the speedups are _only_ 5-ish? On my quad-core I get straight and honest 4x speedups when I switch openmp mode on for my C++ code. I imagine the same should theoretically happen for embarrassingly parallel code. Otherwise it would be "delightfully-parallel-yet-surprisingly-low-net-performance" parallel?

As Tom already mentioned, Code contracts should have static check for premium as well.

Vladimir
August 13, 2010 9:39
Hi Scott, code contracts are definitely cool. Do you know if the big-wigs who decide on product features have taken on board the feedback regarding static code contract checking:

Daniel Smith
August 15, 2010 17:45
My two favourite features of .NET 4 are Tasks for super simple threading and parallel extensions, they have made the slow parts of some of my programs disappear without any effort from me. I am hoping the parallel extensions move towards being able to use the GPU for really large loops. I know there are some wrappers that let you do this but built in no hassle would be great.

Anyway, great stuff. Thanks for sharing!

Tigraine
August 17, 2010 22:29
I've been working with code contracts for a while now and find them particularly interesting - thanks for sharing them with the wider world!

https://www.google.com/accounts/o8/id?id=AItOawkCdGri6Hbtf4D48KJLXjUpvV9myzFWQdo
September 21, 2010 17:08
Hi i really need some help , i nedd a cod for my aplication run faster can annybuddy helpe-me please