I've been creating more PNGs lately on the blog. However, the default PNGs created by most tools are fat fat fat. PNGOUT to the rescue.

So, now I use PNGOUT to compress all PNGs before they are uploaded to the blog now. It's wonderful. It looks like Rick "Paint.NET Guy" Brewster is also enamored with PNGOUT and is considering integrating support directly into PAINT.NET although there might be legal issues. I'd be happy with a simple "call PNGOUT when you're done" option. Poof, we've avoided any legal trouble.

I know there's lots of Windows Apps that front PNGOUT and other PNG apps, but I like my things integrated and automatic.

Make sure you change your path to PNGOUT to match reality. Now you have this available in Explorer: 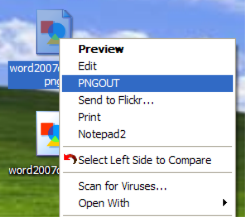 Optimizing all existing PNGs on my blog

Ah, but I also need to tidy up the EXISTING PNGs from my site. First I'll download all the PNGs to my local drive, then fire up PowerShell and run this command that will recurse everywhere in the current directory and below and run PNGOUT on all the PNGs, replacing them in place:

It's a shame that most default libraries for PNG make such large PNGs, considering that this is the "picture format design for the web." Thanks PNGOUT!

It's probably because most apps output PNGs with interlacing, which is a giant waste of time. Interlacing *alone* increases PNG file size substantially-- interlaced PNGs are 25-40% larger than non-interlaced PNGs.